Multi-million commercial bldg. to be established in LT Trading Post

Mayor Romeo Salda has reaffirmed his vow to further d on the vegetable trading post, one of the main source of local revenue of this capital town. Latest figure showed that for the third quarter of this year, revenue receipts from business enterprise from the vegetable trading post posted at P49.046- M higher from the P40-M recorded of the same period of last year. In 2021, the local
government unit collected a total of P51-M.

In his recent message to League of Association at the La Trinidad Vegetable Trading Areas, Inc.’s Thanksgiving and Christmas program, Mayor Salda said “despite the numerous challenges we are
facing, we are trying our best to fast track the expansion of the trading post.” Before Salda announcing the details, the local chief executive recognized local farmers, traders and other
stakeholders of the facility for their efforts in boosting their town’s economy amid the Covid-19 pandemic.

On the development of the trading post, Mayor Salda reported that an initial P60- Million has been released out of the(P120-M) allocated for the expansion works of the facility which is locally funded. Salda explained those who will be displaced during the improvement will be given priority to occupy the first floor of the building. In a bigger scale, Salda also disclosed that his administration plans to construct a multi-level commercial center inside the vegetable trading area.

He revealed that the municipal council, headed by vice mayor Roderick Awingan, presiding officer, passed a resolution authorizing him (Salda) to come in terms with the Department of Agriculture
(DA) in the end view of terminating the earlier Memorandum of Agreement (MoA) entered into by the latter and Municipal Government of La Trinidad, represented then by Mayor Edna Tabanda,
regarding the development of the vegetable trading postconstruction of a commercial building and an access road.

For the record, the MoA was entered into on 2015 which agriculture department initially agreed to allocate some P16-M for the development of the facility especially the construction of an access road leading to the trading post, but DA failed to fulfill its commitment. Thus, Mayor Salda intend
to quash said MoA in order to pave the way for the local government of La Trinidad to push through with the construction of a commercial building inside the trading post. Salda confided that they have already wrote DA through its Cordillera regional office, and they are just awaiting DA
Central Office position.

The local chief executive also committed to replace the old closed circuit television (CCTV) in the facility by installing a high tech equipment in order to safeguard the general welfare of vegetable traders and other stakeholders as he urged them to maintain cleanliness inside the facility being the
town’s show window not only in terms of economic opportunities but also of its tourism viability. 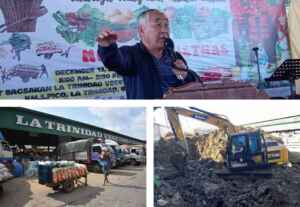