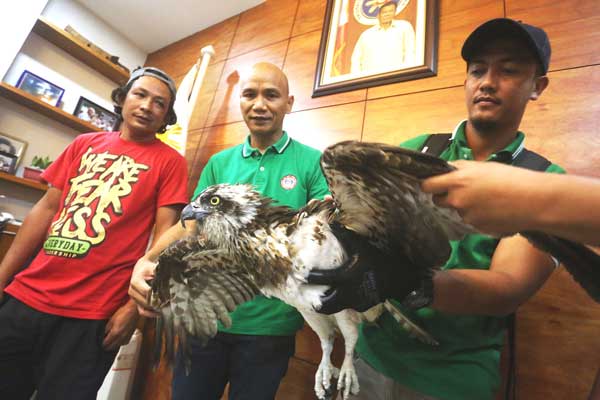 SAN FERNANDO CITY, LA UNION –A wild young ‘osprey hawk eagle’, was turned-over Thursday (Jan. 17, 2019) afternoon here. It was caught by concerned resident after it was trapped on a fishnet cages along the fish pond of Barangay Bangcusay this city.
According to Rose Ann Valdez of the City Environment Natural Resources Office (CENRO), that the wild specie has wing span of 108 centimeter, and with 50 centimeter height, colors of brown and white with spots, yellow eyes, that would be brought to the La Union Botanical Garden, for medical treatment and proper care before it will be released back to the wild.
Valdez added that the specie was in weak conditions due to wounds in the wing’s body portion after struggling to break free from the nets while trying to catch fish for food, she said according to Mr. Al Valdriz who caught the wild animal.
“The specie is now under medical care and observation by the city veterinary and DENR,” Valdez said.
ERWIN G. BELEO