BAGUIO CITY November 26 – The city government needs at least P15 million for its hosting of the upcoming Cordillera Administrative Region Athletic Association (CARAA) regional sports meet in the middle of February next year.

Baguio City was chosen by the regional office of the Department of Education as next year’s host of the annual CARAA sports competition because no other city government in the region signified its intention to bid for the hosting of the annual sports meet.

Mayor Benjamin B. Magalong said the city government needs some P13.9 million for the CARAA regional sports meet while the remaining balance will serve as contingency that may arise during the preparations for and actual hosting of the competition.

The city chief executive encouraged both the private sector, concerned government agencies and the offices of the city government to continue working on their partnership in the ongoing preparations for the city’s hosting of the CARAA to ensure that the same will succeed despite the limited time to prepare for the regional sports meet.

Baguio City served as the host of the CARAA for three successive years from 2015 to 2017 before Abra bidded for the hosting of the regional sports competition last year while Apayao hosted the same this year.

Baguio City always emerged as the overall champion during this regional sports competition and this is due to the availability of more than enough talents in the different fields of sports from various public and private elementary and high schools in the city.

One of the requirements for city governments to be allowed to host the annual regional sports competition is for the existences of rubberized track oval that will help in prepare city athletes to prepare for the stiff competition in the Palarong Pambansa.

The CARAA serves as a venue for the selection of athletes in the different fields of sports to represent the region in different national and international athletic competitions like the Palarong Pambansa, among others.

The conduct of the CARAA in the city will be right in time for the holding of the 25th edition of the Panagbenga or the Baguio flower festival which has placed Baguio city in the tourism map for having one of the well-organized and well-disciplined festivals in the country.

The twin events calls for stricter coordination among the different stakeholders, especially those involved in traffic management, hotel and restaurant services, host schools, security, among others. 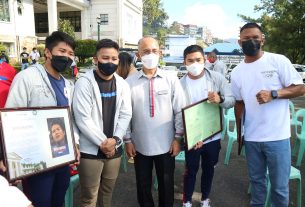