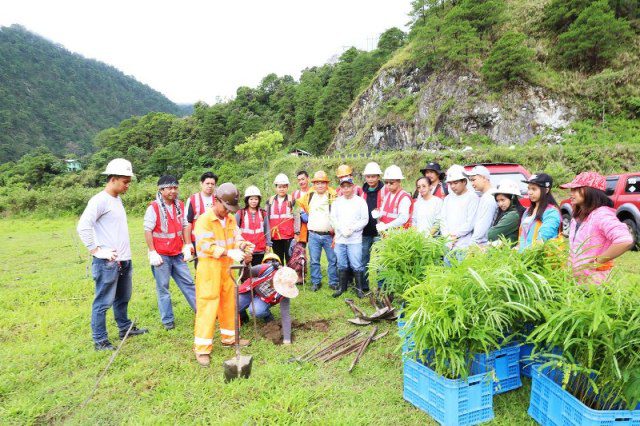 TUBA, BENGUET – Philex Mining Corp. has so far planted more than 48,000 different tree species and flowering plants in over half of the targeted number of hectares of land in this town and Itogon, the two municipalities hosting its gold-and-copper operations in this province, for this year’s reforestation program.
Leon Mocate, senior forestry coordinator at the Environmental Quality Monitoring and Enhancement Dept. (EQMED) of the company’s Padcal mine, in Tuba’s Sitio Padcal, Brgy. Camp 3, said the new tree-planting project will see massive implementation this month, after which the program is seen to focus on the maintenance of the previously reforested areas.
He said personnel of Padcal mine’s different departments kicked off the planting of trees and tropical plants, a project worth P910,281 that has been reinforced through the company’s engagement of 10 contractors, each with a team of at least five people.
With a survival rate of 90 percent, this year’s reforestation program, which aims to reforest 50 hectares (has.) of land with 83,350 trees, involves the planting of forest trees Benguet pine, kupang, narra, ipil-ipil, and antsoan dilau; guava, a fruit-tree; and the tropical flowering plants bougainvillea, calliandra, and coffee.
“We are committed to continue marching on with our reforestation program every year, which we have adhered to over the past more than six decades of conscientious and responsible mining,” the company’s CEO and president, Eulalio Austin, Jr., said.
Julius Bayogan, manager of Padcal’s EQMED, said this year’s total budget for reforestation is P2.1 million, including the maintenance – ring weeding, applying fertilizers, and the planting of seedlings to replace the trees that did not survive – of areas that had been reforested earlier. He added that this year saw the planting of 48,075 seedlings as of Aug. 10.
In an earlier statement, Philex Mining said it allotted P345,968 for the maintenance of 50 has. of land that was on its second year of reforestation, another P637,215 for 100 has. of reforested land on its third year, and P210,000 for the 75 has. currently on its fifth year of reforestation.
It added that a total of 20 has., equally divided between Sitios Banawel and Bagbag, in Itogon’s Brgy. Ampucao, would be planted with various tree species, while 8 has. in Tuba’s Sitio Kimabayo, Brgy. Camp 1, and another 6 has. at the Albian Slope, Brgy. Camp 3, were also part of this year’s reforestation project.
Separate areas covered by the project included 5.5 has. and 5 has. in Brgy. Camp 3’s Sitio Alang; 2.5 has. in the same barangay’s Sitio Pokis; 1.5 has. at the quarry area near Padcal mine’s Tailings Storage Facility No. 3 (TSF3), in Brgy. Ampucao; 1 ha. on the roadside from Sitios Ligay to Bas-eg, Brgy. Camp 1; and 5,000 square meters in Sitio Maligaboy, also near TSF3.
Already, Philex Mining has reforested close to 3,000 has. of land in Tuba and Itogon, with over 8 million trees planted. It has spent close to P70 million for its reforestation activities in these two host towns in Benguet since 1987, following a community-based reforestation program that had been pursued in the area in the 1960s as a livelihood project for the stakeholders. PR / ABN