SADANGA, Mt. Province Work has started for the reconstruction of a 60- meter-long steel and concrete
bridge connecting the two villages Sadanga town to the national highway, following a groundbreaking ceremony on Thursday morning at Funayan, Betwagan village. The P57.320-million worth bridge will allow vehicles to cross the mighty Chico River and enter the agritourism villages of Betwagan and Anabel.

The infrastructure is expected to benefit 564 households in the two villages, improving their access to trade
market and delivery of social services, said Sadanga mayor Adolf Ganggangan. “We will also start
planning the tourism aspect because this will help spur tourism in the area,” Ganggangan said. The villages of Betwagan and Anabel feature almost 400 hectares of agricultural lands, mostly picturesque rice terraces akin to the famous Ifugao Rice Terraces, according to the town’s records.

The bridge is also expected to deter possible situations of armed conflict caused by rebel groups, promote other rural development, and boost the overall welfare of the community, said Assistant Secretary Andres Aguinaldo Jr. of the Office of the Presidential Adviser on Peace, Reconciliation, and Unity (OPAPRU).
“This activity is and will be a testament of good governance as well as a symbol of development and sustainable peace,” said Aguinaldo.

Aguinaldo and Ganggangan led the burying of the “time capsule” containing the plan and program of the
bridge, together with District Engineer Alberto Gahid of the Department of Public Works and Highways (DPWH). A similar P56-million worth bridge under OPAPRU’s Payapa at Masaganang Pamayanan was almost completed in 2015 but was swept by the raging river during a typhoon.

It was then one of the biggest projects given to Mountain Province by the agency, said Aguinaldo. To realize the botched infrastructure, Aguinaldo said OPAPRU lobbied with the late Sadanga mayor Gabino
Ganggangan to have a similar project be funded. It finally received funding from DPWH’s Sustainable Infrastructure Projects Alleviating Gaps (SIPAG). Gahid said the project is expected to be completed in 258
days, should there be no natural calamities that will hamper construction. “We are hopeful that it will not suffer the same fate of the previous project because we already learned from it,” said Gahid. 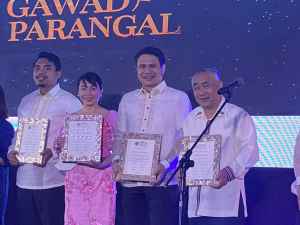 FARMERS IN HIGH SPIRIT FOR THE WET CROP SEASON