TUBA, Benguet – Robbery at the Shrine of Brown Madonna continues, this time, a giant selloum plant that has been at the shrine for more than two decades. The newly transplanted five-foot, six inch diameter plant was taken from the shrine, shrine administrator Fritzgerald Padilla told this writer Tuesday night. With renovations finally finished at the shrine at barangay Tadiangan here, the selloum plant that was relocated to give prominence to a forgotten marker placed by its builder, the late Narciso Padilla.

It was once located at the right side of the shrine’s frontage, but it has covered a three foot wide hole that holds a 30 year old marker, which is almost forgotten. The slab like item is the late Padilla’s marker for those who helped in the rescue operations after the 1990 killer earthquake.

Almost forgotten, the wordings are almost undecipherable until it was cleaned and a varnish added to it. “We had to relocate the selloum plant at the left side of the shrine’s frontage right before the gate so that the marker can be seen again,” said the younger Padilla. The left side hosts some benches and a small garden, the shrine’s signage, a 10-commandment marker and a mini-bridge.

It is usually used by passers-by for picnic, who, unfortunately, leave their trash behind, said Padilla. Padilla has already reported the plant robbery at the police station near the shrine.

“We replanted it last Sunday and probably was stolen Monday. I reported it to the police at Tadiangan on Tuesday. We have an initial suspect already,” he told this writer. The plant costs at least P10,000 to P15,000 in the market that may have caught the attention of the person or persons who took it. Plant stealing has become common during the year-long pandemic with planting as a fad that has resulted to the high cost of plants.

Padilla said that several items at the shrine were stolen in the past not just plants. Among the items that have been stolen include the Brown Madonna’s crown, for example had been lost and never replaced, and candle stands, among others.

The five day renovation at the shrine started Tuesday last week with the aim to host a baptism mid-May particularly the Lucky Christmas and New Year’s Babies. “It will be a small gathering due to the pandemic,” said Padilla counting about a dozen to less than 20 in attendance including the babies, their parents, the priest and a few guests.

Padilla said that a commemorative mass will be held at the shrine on July 16 in honor of the unnamed heroes who helped save lives during the temblor. The young Padilla hopes to restart a regular mass at the shrine, which was done at least once a month when his father was still alive. The veteran newsman Padilla died in March 5, 2019 due to massive heart attack. 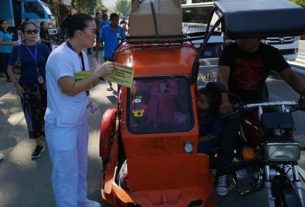 No Smoking In Public Vehicles