The towns of Bucay, Tayum and Danglas already have their Bahay Silangan as early as last year. A post in Iloco on Sunday at the Abra Province Facebook page read: “Lectures have been done in 17 municipalities of Abra for the put up of a Bahay Silangan in their own place.”

The structures have been done and are ready to facilitate clients but the schedule of inaugurations is being awaited. The note added: “At present, the inauguration of these facilities are being scheduled.”

The construction of the Bahay Silangan have already been approved as the province is on its way of fulfilling Executive Order JN-02 of Gov. Jocelyn Bernos, that mandates the establishment of Balay Silangan Reformation Centers in all municipalities of Abra. The lecture is the first step in the adherence to said EO of Bernos. Lecture are yet to be scheduled for the remaining towns of: Licuan-Baay, Malibcong, Manabo, Pilar, Sallapadan and San Isidro.

Signed last January 22, the EO said “the establishment of Bahay Silangan or rehabilitation center in each municipality that shall shelter and cater to drug personalities, provide intervention, counseling and livelihood training.”

The training conducted under the Bahay Silangan program would rectify negative behavior of former drug personalities making them more receptive to rehabilitation. 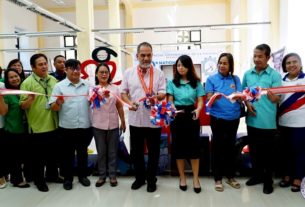 The Provincial Government of La Union