The city government has contracted displaced ambulant vendors as cleaners for 10 days, even as 10 cooperatives have received cash assistance.

The Public Employment Service Office (PESO-Tabuk) this week launched its emergency employment program to assist displaced ambulant vendors whose livelihood were severely affected by the restrictions of the Covid-19 pandemic this week.

They were deployed to maintain cleanliness, rehabilitate, and repair roads and canals in the city hall compound and their barangays.

He added that since the pandemic restricted people’s movement and schools shifted to distance learning, the ambulant vendors selling inside, outside, and near these schools lost their primary source of livelihood.

Sta. Ines said the 100 beneficiaries are from barangays of Bulanao Centro, Bulanao Norte, Dagupan Weste, Dagupan Centro, and Laya East. Mayor Darwin C. Estrañero said that the assistance is an initiative of the city government to complement national programs that provide aid to the most vulnerable sectors who bear the brunt of the economic downturn caused by the pandemic.

The mayor added that aside from providing a lifeline to ambulant vendors, the program will also aid in the economic recovery of the city.

Aside from city-funded programs, the PESO is simultaneously conducting orientation and implementation of the TUPAD (Tulong Panghanapbuhay sa Ating Disadvantaged/Displaced Workers) program, community-based emergency employment of the Department of Labor and Employment (DOLE).

Sta. Ines said that there are around 300 beneficiaries for the TUPAD funded by DOLE, a partylist group, and offices of national government officials.

Implemented by the CLGU, led by City Mayor Darwin C. Estrañero, the project is to provide strategic support services to accommodate the reclamation of the affected micro and small enterprises, which were considered the most vulnerable sector of the community-based cooperative during this time of adversity.

Cooperatives involved in microfinancing, auto supplies, bakeries, farm inputs, hog raising, and agri-loan are among those that are likely to benefit the most from the additional funds.

“This is to assist each organization in increasing their total assets and revenues, as well as inspire new recruits to join them,” which is the aim of the program initiated by the mayor.

Mabaca Balbalan Marketing Corporation (MBMC) chairperson Mario Baluyan said the allotment not only increased the number of MBMC members, but also inspired their other members to become more active.

This will increase their agri-business allowing them to continue to grow despite the pandemic’s setbacks.

The cooperatives received their PhP100,000 cash assistance during a simple program at the M Hotel Wednesday. 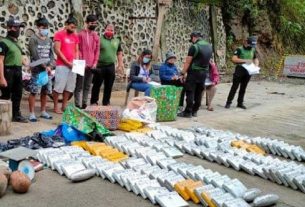