Eduardo Aratas (middle), manager at the Legal Division of Philex Mining Corp.’s Padcal mine, the division’s Cesar Romualdo (2nd from left), and the manager at Padcal’s Electrical Services Dept., Alexander Oggang, raise their trophies after the Awarding Ceremonies of the 2017 PMSEA Golf Tournament, held Nov. 22 evening, at the Cameron Forbes Ballroom, Baguio Country Club (BCC), in Baguio City. Also pictured are Louis Leganzo (right), a dentist at Padcal’s Philex Sto. Niño Hospital and who won a raffle draw during the awarding ceremonies, and the mine’s manager of Mine Mechanical Dept., Carlito Ferreria. Being the tournament champion with a score of 59, Aratas received the Lowest Net trophy, while Oggang was pronounced the Most Exercised Player or being the least competitive as a beginner in the game of golf. The trophy being raised by Romualdo belongs to the Philex Team, which won First Runner-Up overall and composed of Philex Mining’s president and CEO, Eulalio Austin Jr. (not in photo) with a score of 69, Aratas (70), Romualdo (76), and Leganzo, whose score wasn’t counted in a “4-to-play, 3-to-count” format. The tournament was held at the BCC in conjunction with the 64th Annual National Mine Safety and Environment Conference (ANMSEC), at the CAP-John Hay Trade & Cultural Center, from Nov. 21-24, spearheaded by the PMSEA, or Philippine Mine Safety and Environment Association. PR 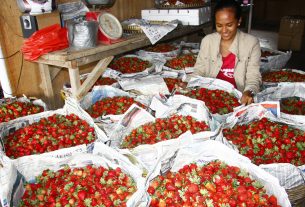