TUBA, Benguet- Villagers especially school children at Sitio Balococ, Barangay Camp 4 in this town, have something to look forward and their fears may soon be lessened in crossing the decades-old steel footbridge following a recent action by their barangay officials. Acting on the clamor by residents that include vegetable farmers and small scale miners of Sitios Balococ and Goldstream, barangay
officials of Camp 4 recently passed a resolution, asking the help of Benguet Congressman Yap to allocate some P3-Million for the rehabilitation of the said footbridge.

“The current condition of the footbridge at Balococ is unsafe to the residents, “ barangay officials stated
through their resolution ( Res. No. 54. S 2022). The steel footbridge, estimated in less than 100 meters in length separated by steep mountains, and about 30 meters deep down, divides Sitios Balococ and Goldstream. “The rehabilitation of said footbridge is a dire need among the residents for their easy access, “the resolution stated. “ It is an alternative farm to market road access.”

Villagers including small scale mining associations have been appealing to the government to sustain its
support like infrastructure improvement of road network system, and in the field of agriculture, among others. In an interview on Monday (Sept 12) ,Mildred Camoda, 18 years old, 12th grader at Twin Peaks National High School said :” It’s good that we are allowed to back to school and continue our studies through face-toface learning, however, we hope that our pathways, roads and our footbridge should be
improved to ease our daily struggle and to keep us safe,” Camoda said in the vernacular, who herself a resident of Sitio Bacoloc.

“Congressman Yap, Sir, we the residents of Balococ (Camp 4,Tuba),are appealing for your help, and we are inviting you to come and visit our place, and whatever assistance you can extend, we owe a big gratitude,” Camoda said in the local dialect. “Your assistance will be a great help in lifting our living
conditions, ease the hardships of students in going to school and soften our daily struggles,” added Camoda , a consistent honor student, and who plan to take up education as her primary course and, journalism as her second choice.

Camoda, like other local residents especially her fellow students in their community, fear for their safety in crossing the footbridge with its present condition. And they don’t want that another accident may happen like when a nearby footbridge collapsed, resulting to injuries to some residents. Actually, the approval of
the said resolution was through a motion by Mercedes Bayec, indigenous people representative mandatory
representative (IPMR) of Barangay Camp 4, herself a resident of Balococ. And all the barangay officials (Camp 4) were present during the approval of the resolution that include Barangay Chairman Romeo
Salinas, who told this writer that the rehabilitation of the said footbridge is paramount for the general welfare and public safety.

Kagawad Bayec , who was nursing then from ailment , acknowledged Angelita (Sugalan), who took extra time and efforts to show to this writer their place-living conditions of the people. Actually, Angelita (Sugalan) together with Sandy Asmin, former barangay kagawad, now treasurer of Goldstream SSM, and some
community volunteers, toured this writer to their village, and showed some projects initiated by their village and also government/barangay such , path walks, slope protection, works-road railings including some vegetable farms, and nursery facilities (tree planting). “Bayanihan spirit is very much alive in our villages, “
Angelita stressed. 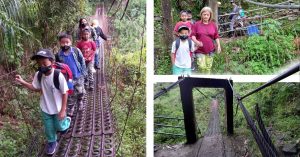