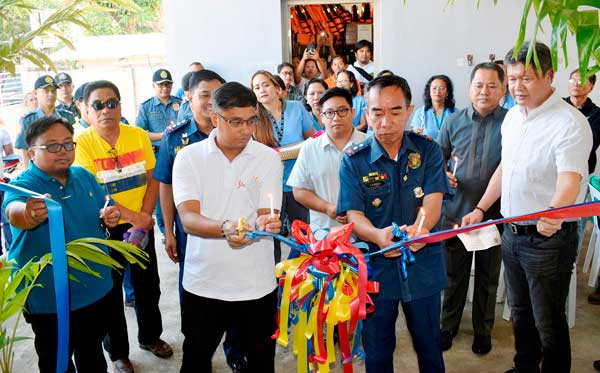 BAUANG, La Union – A drug reformation center locally called as the Dungngo ti Bauang Balay Silangan (Love of Bauang Shelter House), established by the local government, was inaugurated on Jan 28.
It is the second Balay Silangan to be erected in Ilocos Region.
At present, four drug reformists are enrolled in the six-month program.
“We want these drug surrenderers to reform and be integrated back to the society equipped with skills and provided with livelihood through these reformatory rehabilitation program,” Atty. Marvin Tavares, officer-in-charge of the Philippine Drug Enforcement Agency (PDEA) Region 1, said.
The establishment of Balay Silangan in municipalities and cities is mandated under the Dangerous Drugs Board (DDB) Regulation Number 2, released last year.
Those qualified to undergo the reformation program include drug personalities who surrendered with no pending criminal case, warrant of arrest, those who availed of the plea bargaining agreement and those who have served several jail terms for violation of the Dangerous Drugs Acct or the RA 9165.
The Dungngo ti Bauang will be a collaborative effort of the rural health office, municipal agriculture office, municipal disaster risk reduction and management office, human resources and management office, other agencies like the Philippine National Police, Department of Education, for the alternative learning system, among others.
Included in the program are lecture awareness on substance abuse, RA 9165, counseling meetings, moral recovery activities, personal and life skills, community service and livelihood or employment education.
“The six-phase program will be flexible for these drug reformists but we will ensure that they will be productive,” Mayor Eulogio Clarence Martin de Guzman III said.
The center is named Dungngo ti Bauang because “dungngo means love, care and compassion for these drug reformists”, de Guzman added.
They hope to expand and cater in the future even to non-residents of Bauang.
Jumar Biazon, 27, one of the four enrolleees, is optimistic that the program will help him be reintegrated to the community and be provided opportunities in terms of livelihood.
Biazon have undergone the six-month community-based rehabilitation and on probation for two years.
He, along with the others who entered plea bargaining arrangement with the Department of Justice, are under close monitoring by the PDEA and PNP.
Tavares also said the “drug situation in the region is at a manageable level and that there is a decrease in the number of operations because of the conduct of barangay drug-clearing operations.”
Since 2017, the local government of Bauang has allotted nearly six million pesos in its anti-drug campaign, most of which is the provision of livelihood opportunities for the drug surrenderers.
Joanna Diaz-Sabado, PIA-La Union