Dinengdeng Festival, a symbolism of culture of Ilocano people 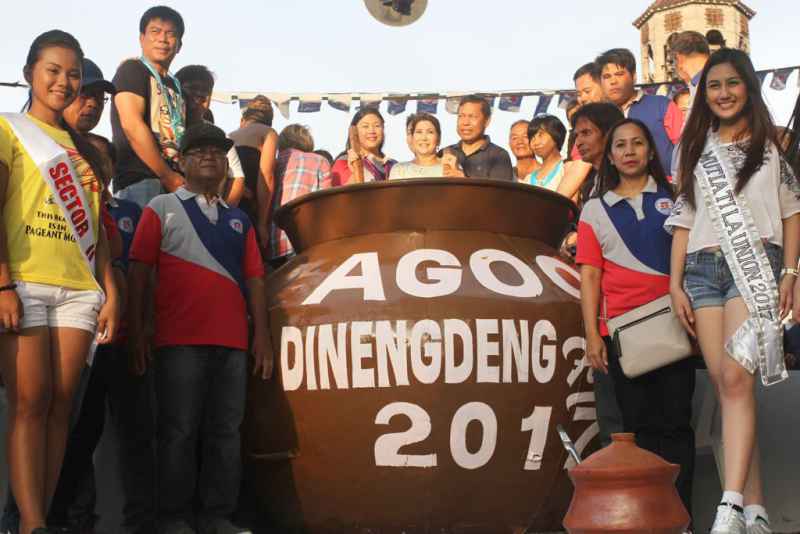 AGOO, LA UNION – Everyone will surely agree that fiestas in the Philippines bring smile to the faces not only of its townsfolk but also to the tourists and visitors that witness what a local festivity could bring as an experience.
On April 30, the local government unit of Agoo formally opened its weeklong fiesta dubbed Dinengdeng Festival. A banca race and triathlon kicked off the annual festivity.
On May 1, one of the most awaited parts of the festival is the cooking of dinengdeng by the barangays (villages) and different restaurants in 101 ways. It was held at the Don Mariano Marcos Memorial State University – South La Union Campus (DMMMSU-SLUC) Sports Complex, here.
Dinengdeng is a dish which is commonly cooked by mixing choices of vegetables in boiling water added with fish and seasoned with fish bagoong (fermented fish sauce).
For 13 years now, the festival aims to promote the local tourism of the town, which was identified as one of the Spanish settlements in the region, primarily to build up an identified one that would prop up its cultural and livelihood values.
In the cook-off, a large banga (clay pot) was used in the cooking which fed more than a hundred visitors, guests, and residents who also had a free experience of seeing the viand while it is being prepared.
Some of the mouthwatering varieties cooked include vegetables mixes such as talong (eggplant), sigarilyas (winged seguidillas beans), sitaw (string beans), upo (white squash), kabute (mushroom), kardis (pigeon pea or red gram), malunggay (horse radish) with bulong kalabasa (squash blossoms or zucchini flowers) and many other vegetables grown by local farmers.
“Dinengdeng is very symbolic of our culture as Ilocano people. It is simple, nutritious and composed of ingredients that are always readily available,” said Mayor Stefanie Ann Y. Eriguel in her speech.
In the same celebration, the Festival of Festivals, a street dancing competition showcasing the colorful and vibrant cultures and traditions of the nearby towns and provinces in the region was also held to support their local festivities as well.
Pugo’s Tinungbo Festival emerged as the champion followed by Naguilian’s Basi Festival and on the third spot is Balaoan’s Panagyaman Festival. All towns are from the province of La Union.
On May 2, the cooperation and support of all the different agencies and sectors of the town composed of participants from the LGU, barangays, transport groups, academe, and medical societies also performed in an inter-agency competition held during the Rabii ti Umili (town’s night).
Blessing of LGU and congressional projects was featured on May 3.
Other activities lined up for the festival were the Bakla-ngit, a gay pageant competition on May 4, and the Pinoy Fiesta (family day) on May 5.
On May 6, the search for Miss Agoo 2017 was held as the culminating and highlight of the fiesta wherein the fairest lady, Maria Camille Dalmacio, was chosen to sustain the six-winning streak of the town in the Mutia ti La Union.
The Agoo fiesta, celebrated annually from April 30 to May 6, is in honor of Santa Monica or the Our Lady of Charity, the town’s patron saint. Anne Hazel Fajardo-Flores, PIA-1 / ABN