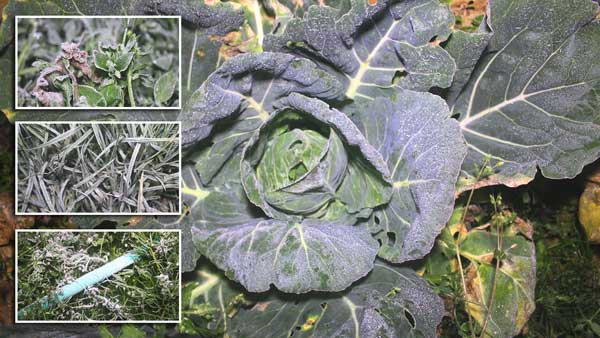 LA TRINIDAD, BENGUET – Frost bite damages on highland vegetables in Benguet remains minimal, officials vowed.
Frost has developed in some Benguet highland locations as temperature in the highlands, including Baguio has dropped especially during early mornings reaching a low of 9.2 degrees on Wednesday (January 30) in the city.
Low temperatures of 6.4°C and 7.1°C were also recorded at Mount Santo Tomas in Tuba, Benguet.
Pagasa said the continuing drop in temperature is due to the active northeast monsoon winds from Siberia and mainland China.
The all-time-low temperature record in Baguio City was 6.3 °C in 1961 and 6.7 °C on February 18, 1963.
Although frost is affecting some vegetable farms in Atok town and Barangay Madaymen in Kibungan, most of the farmers in Benguet said they were spared of the damages.
Atok town agriculturist Cherry Sano claimed there were no reports yet of damages on crops although frost has arrived in some higher elevation in the town on Monday (January 28).
Similarly, Augusta Balanoy, manager of the Benguet Farmers Marketing Cooperative, said frost has had no effect on the supply and cost of vegetables because this did not affect a quarter of the total vegetable production of Cordillera.
Balanoy appealed for retailers in Metro Manila not to take advantage of the reported frost occurrence to jack up prices.
Vegetable frost occurs because of the low temperature experienced in areas with high elevation. Once the moisture enters without the presence of air, it develops into ice wilting the leaves of crops.
ACE ALEGRE

The two artists in the Session: SketchTour of Baguio on September 30 are Aurelio Castro III, sitting and sketching, in conversation with...

PART AT YOUR OWN RISK

-diggings of sewerage projects along Kisad Road cause traffic problems to motorists due lack of road signs Carlos C. Meneses/ABN

The Baguio City Council has revisited the issue on the ‘staggering’ increase in the payment of real property taxes in the city. In a...