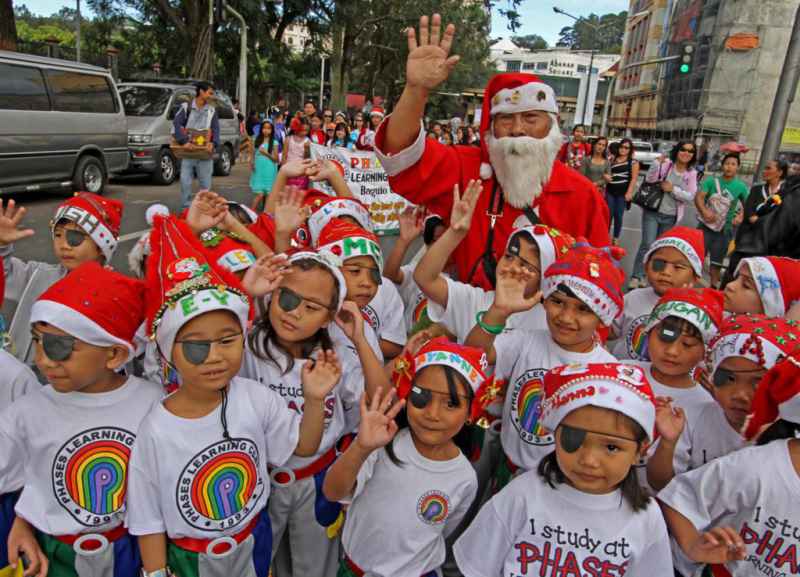 Tributes flowed for Narciso “Nars” Padilla as hundreds said goodbye to the veteran journalist who was remembered as “Santa Claus; a good man, event organizer, full of passion, very active in sports and tourism programs and protector of the Fourth Estate.”

A group of differently-abled people rendered heart-touching songs that created the mood of the evening, their way of expressing gratitude for the countless support they received from Nars.

Mayor Mauricio Domogan started the emotion-filled honor. “We are here to pay our last respect to Manong Nars (Padilla), a sportsman, writer and icon of journalism in the city.

A photographer and event organizer, and known as ‘Santa Claus’ in Baguio for a period of forty years more or less,” Domogan said in his heart-touching eulogy.

“He (Nars) started Silahis ng Pasko, which we celebrate for a month in the City of Baguio. Surely, we are going to miss him,” he added. Domogan recalled the active involvement of Padilla especially in the field of tourism and sports.

In a number of sports meets held across the country, the mayor pointed out how Nars led Baguio-Cordillera sports warriors en route to capture the coveted title.

At some point, Domogan cracked humorous tones to give impetus about the meaningful events he shared with Padilla. “I can remember, one time we were together during a Philippine National Games (PNG) in Manila, he brought, of course our dance troupe.

I was in my complete native attire,” Domogan said. Domogan added, “the parade started at 1:00 o’clock in the afternoon and Nars was the one leading us, we were going barefoot.

I did not expect the heat (40-50’C) of the asphalt, so the only way to minimize our suffering is to keep dancing. When we arrived at the main sports ground, everybody stood up and gave Nars, his group and the Cordillera sports delegation a rousing welcome.”

The mayor offered a prayer in his native tongue for the former city councilor and tourism director and also for his family.

The tribute walked through some of the highlights of Manong Nars’ lengthy career in journalism and as event organizer.

Nars’ career as founding president of NCCB spanned for decades and painted a comprehensive picture of a man who was a mentor and who guided many journalists through their career start, like Thom Picana, publisher and editor of Amianan Balita Ngayon (ABN), Victor Luacan, Pigeon Lobien, Roderick Osis, Artemio Dumlao and this writer, among others.

Baguio, as well as Manila-based photo journalists always wanted to work with him. Camera work, at the very heart of news photography, the images that tell the story.

“Behind the serious newsman we all knew a much friendlier Manong Nars,” said Bong Cayabyab, photographer of the mayor’s office.

One colleague said: “Over the years, in the news room three words resounded: A man of strictness, creativeness and fun.”

Art Tibaldo, an artist, a photo journalist employed as information officer of the Department of Trade Industry-Cordillera, represented his wife, Helen, regional director of Philippine Information Agency-Cordillera and pointed out some of Nars’ and NCCB’s historic projects to include the busts of Col. Lyman Kennon and Daniel Burnham, known to be the builder of Kennon road and architect of the city, respectively.