Life in a sidewalk: a closer glance at one of the many faces of Baguio City 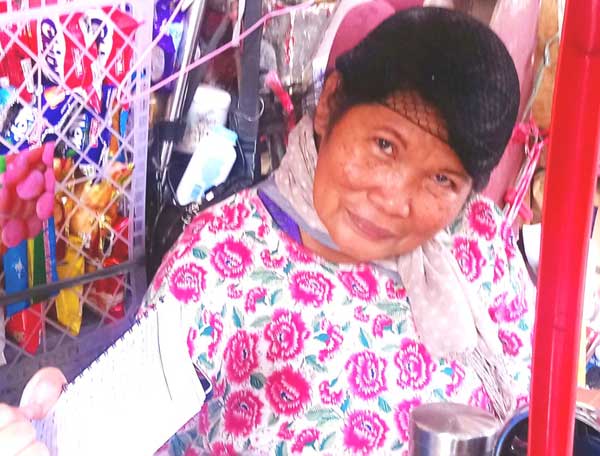 As the weather becomes colder with occasional drizzling in the afternoon, the atmosphere in the city of pines becomes thick with the merriment of the holiday season.
While visitors and townsfolk alike are hustling here and there, Rosalinda Soriano, 58, had been living next to a rundown building occupying a small portion of a sidewalk, which serves as her little stall to sell newspapers during the day and a makeshift camp to sleep in during the night – for 18 years.
With a shy but warm smile, Aling Rosalinda shared her story.
Her’s is one of the many who, while trying to find some ease from the severe poverty of her hometown, took shelter in the city hoping for a better life.
She said she came all the way from Cagayan province. She’s the fourth of five siblings who all have families of their own, except for her who remained single. Two of her siblings remained in the province while one is in Apayao and the other in Pangasinan. They seldom see each other, when her siblings come to the city or when she goes to their places every once in a while.
She narrated that at an early age she has known poverty and a life just trying to get by each day. Barely finishing Grade I, she soon learned to sell vegetables from home to home.
“Our house is very far from the school,” she said in Ilocano, “we had to walk over dikes.”
Contracting polio, she said she could not walk. She tried to exercise her legs until, after some time, she could put some force in them, enabling her to walk, “agisursurak metten ti natnateng idiay balbalayen idiay ayanmi (I started peddling vegetables from house to house in our neighborhood).”
She soon learned to make a living by being a helper until a neighbor convinced her to come to Baguio City saying she only has to sit all day while selling some snacks.
From 1991, she served as a helper at the then Wild Wild West folk house along Otek Street until it closed down sometime in 2000. From then on, Rosalinda camped beside the old building where she remained until now, selling newspapers, some snacks and some highland vegetables. She sometimes does tailoring services using her old but still reliable sewing machine to help with her daily expenses.
When asked why she chose to stay there for so long, she answered life is easier that way.
Though simple, one only needs to persevere in order to survive. And even if she remained single, she was never alone.
Through time, she earned valuable friends, who are now like her family. “Sometimes, someone would pass by holding some food, giving some to me,” she said in Filipino. Most of the times, the generous Chinese businessmen in the area are the ones providing her with food.
She also has other neighbors, who like her have set up small stalls selling some coffee, pancakes and other snacks. “Kapag may pagkain sila, binibigyan nila ako, kapag ako naman ang meron, nagbibigay din ako sa kanila. Minsan nagtataka mga dumadaan, para lang kaming pamilya na nagpi-picnic. (When they have food, they share it with me and when I’m the one who has food, I also share it with them. Sometimes passersby are wondering, we are like a family just having a picnic).”
Just recently, she said, Barangay Chairman Jeff Cheng asked her to go back to her hometown because her situation here must be hard on her but she begged him to let her stay.
She said in Cagayan, there would be no choice but to make a living by planting in the fields, a work not suitable in her situation. “Hindi ko na kaya ‘yun (I won’t be able to do that).” Life there is hard, she said explaining it is easier to make a living here in the city.
During the times when the city government aggressively implemented the anti-obstruction in the sidewalks and cleared them from sidewalk vendors, she also pleaded her cause saying she’s living alone without any family. She went to the office of City Mayor Mauricio Domogan, who generously granted her plea. So she remained at her place and even the police and the Public Order and Safety Division personnel left her in peace as long as she doesn’t obstruct the sidewalk.
Maintaining the cleanliness of the area, her daily ritual begins by cleaning the trash thrown by passersby at nighttime, “Syempre yung mga dumadaan, nagkakalat sila. Winawalis ko para malinis naman, parang exercise ko na rin. (Because the passersby just throw their trash. I sweep the area to keep it clean, and it also serves as a form of exercise for me).” Of course she ends her day making sure her place is clean and orderly before she goes to sleep.
Through cold or hot weather, she stays at the same place. If the sun shines too brightly or if a strong typhoon blows, she puts up a makeshift barrier made of plastic and tarpaulins to keep away from the scorching heat and the furious rains. She is being kept safe by the grace of God, she said.
Though at this time of the year, the temperature would sometimes drop down unbearably low, Rosalinda said she can keep herself warm, “Natured sa daytoy bagi kon iti lammin na (My body seemed immune to the cold).”
Not denying that old age may be creeping up soon, affecting her simple and meager daily living, “Hangga’t kaya ko pa, dito pa rin ako (While I still can, I’ll stay here).”
And the greatest gift this Christmas? She said she will appreciate whatever she receives. She already has her friends who always check up on her and a place to stay – which is, according to her, a lot to be grateful for.
MELANIE ANGA-ANGAN/ABN