The Mt. Province Provincial Health Office reported the case that involves a patient from Bontoc, its provincial capital.  Though the case was included in the census of COVID-19 cases by the National Capital Region (NCR).

The first patient in the province to contract the disease have survived.

According to the provincial health office, the second patient is a 28-year-old male who hails from Samoki, Bontoc.   He has no travel history since the start of the community quarantine last March 17, 2020 until his recent travel to the NCR.

According to reports, the patient only travelled to Manila last July 8 for the processing of his overseas travel documents as pre-requisite for his departure to work as a seafarer.

He was swabbed last July 11.   His RT-PCR test which was released last July 13 revealed that he was positive of the COVID-19, though asymptomatic.

The patient is currently in the NCR and provincial officials were only informed of the case Thursday night, because the case was first reported in the NCR as the patient has indicated the latter as his address during the testing.

Contact tracing immediately began while provincial officials assured that those tasked to contain the spread of the disease are on top of the situation, Gov. Bonifacio Lacwasan said.

Early and dirty politics apparently has begun in Benguet 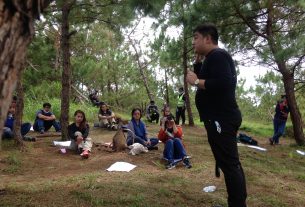 Building Up Communicators through Grounding Techniques and Forest Bathing