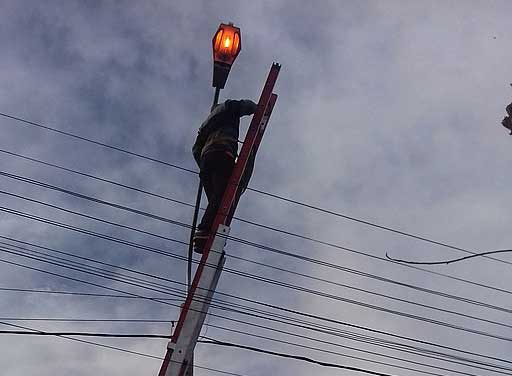 Power transmission operator NGCP is renewing its call for the expedited passage of the Anti-Power Line Disturbance Act as it reminds the public to observe right-of-way clearances following several ROW breaches recorded recently, affecting NGCP’s power transmission services to its customers.
On November 13 last year, the Nabunturan-Monkayo 69kV line tripped, resulting in an hour-long power interruption to customers of the Davao del Norte Electric Cooperative (DANECO). It was discovered that a land owner harvested his falcata trees using a chainsaw, causing the falling tree to swing and hit the power cables of Towers 11 and 12 of the said line in Poblacion, Monte Vista, Compostela Valley. Power was eventually restored later after NGCP line crews remedied the situation.
Meanwhile, the Sta. Barbara-San Jose 138kV line in Iloilo went on emergency shut down last November 15 when an unidentified man was seen climbing one of the towers along the said line. Several other 69kV power lines in the area were likewise put on emergency shut down to ensure the security of the transmission system and the safety of the person involved and the responders in the area. This resulted in power interruptions lasting a few hours affecting various parts of Iloilo and Antique. Power was restored when the area was cleared and declared safe for re-energization.
Another incident occurred on November 18 when the Maco-Banaybanay 69kV line in Compostela Valley tripped due to kaingin or grass fire between Towers 259 and 260. Upon investigation, a witness claimed that it seemed like the fire was intentionally started to make way for planting of new crops.
Also in November, a tripping incident was recorded along the Mexico-Calumpit 69kV line when a laborer working on the construction of a new building along McArthur Road, San Simon, Pampanga accidentally swung the 18-foot steel bar reinforcement which directly hit the conductor of the line. The victim suffered slight electric shock and caused a power interruption. A similar incident also occurred in Batangas City last December 10 when a construction worker was electrocuted when the tubular metal he was using in plastering the wall breached the safe distance of the Bolbok-Ma. Parang-Concepcion 13.8kV line. He fell to the ground and was rushed to the hospital for medication.
Power transmission operator NGCP expressed concern over the recent spate of right-of-way violations. “We have been very serious in the conduct of our information and safety campaigns in the communities near our transmission facilities. But our efforts are often ignored because there is no legal consequence to breaching safety clearances. These breaches in right-of-way not only threaten the reliability of the transmission system, causing unnecessary inconvenience to power customers, but also risks the lives of anyone involved or living near the area,” stressed NGCP.
The company called on the legislative body for the immediate passage of the Anti-Power Line Disturbance Act, which seeks to prevent obstructions and penalize the introduction of high-growing vegetation or hazardous improvements along power line corridors. Senator Sherwin Gatchalian, chairperson of the Senate Committee on Energy, recently sponsored the Senate version of the said act, Senate Bill No. 2098 or the Anti-Obstruction of Power Lines Act of 2018. Congressman Carlos Uybarreta, vice-chair of the house energy committee, sponsored the lower house counterpart of the bill, which was passed on September 25, 2017.
“We are grateful to Senator Sherwin Gatchalian and Congressman Carlos Uybarreta, who sponsored the bill in the Senate and in the House, respectively. We hope that this bill, when passed into law, will act as a deterrent to the public from breaching the required clearance around the power transmission lines. Incidents like these will be prevented from happening. Not only will the continuous flow of power to homes, communities, and industries across the country be guaranteed, but injuries will also be minimized,” NGCP added.
NGCP is a Filipino-led, privately owned company in charge of operating, maintaining, and developing the country’s power grid, led by majority shareholders Henry Sy Jr. and Robert Coyiuto Jr.
PR/ABN