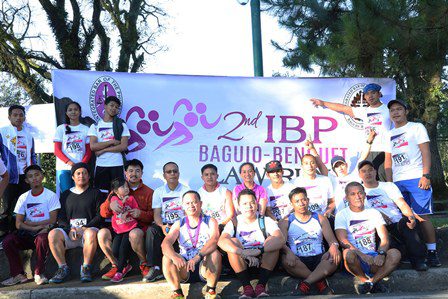 TUBA, BENGUET – Supporting sports events as part of its advocacy for a healthy and holistic lifestyle, Philex Mining Corp., through its Padcal mine in this province, took part in the recently concluded fun run organized by the Integrated Bar of the Philippines (IBP)-Baguio City-Benguet Chapter, where two of the 34 candidates it fielded finished as major winners in their respective categories.
Beverly San Juan, a Grade 9 student at the Saint Louis High School-Philex, was the champion among the girls in the 3-kilometer (3K) run, while Eunice Bacoco, an underground safety engineer at Padcal’s Safety/Loss Control Division, placed second among the 5K female finishers in the “2nd IBP Baguio-Benguet Law Run,” which started and finished at the Melvin Jones Grandstand, in Baguio City’s Burnham Park, on Sept. 30.
“We are glad that we were able to extend our support and participate in this worthy endeavor by our friends in the law profession in Baguio City and the whole of Benguet,” Eduardo Aratas, manager of Padcal’s Legal Division, said after the event, where he ran in the 3K category. “We look forward to running again with the IBP next year. While we have our own annual sports fest and other sporting events at the mine camp, we still go out of our way to support similar activities.”
Philex Mining also supported the maiden “Philippine Councilor’s League (PCL)-Benguet Fun Run,” held in the provincial capital of La Trinidad, on June 24, where Rico Arceo of Padcal’s Legal Dept. finished 8th in the 10K run, clocking 41:40. The company had fielded more than 30 participants in the fun run, which had 130 overall finishers in the 3K, 5K, and 10K categories.
On April 29, Philex Mining hosted the “2nd National Martial Arts Games: An Open Invitational Tournament and Festival of Arnis and Sikaran,” at its Padcal mine’s APP Sports Center, in Tuba’s Sitio Padcal, Brgy. Camp 3, where 14 of the company’s 33 players were among the winners who had since been tasked to represent the Philippines at an international martial-arts event in Minsk, Belarus, on Nov. 29 to Dec. 4.
It was the second time for Padcal to host the annual event, where more than 40 of the 120 participants had won awards in the white-and black-belt divisions as well as other categories of arnis, a Filipino national sport and martial art using a rounded stick of rattan or wood, and sikaran, where players use their feet only during a fight match. Arnis is becoming popular even in other countries, with Arnis Philippines, a group of martial artists headed by Jonathan Abaya, having chapters in Japan, the US, Nepal, Australia, Iran, and India. PR / ABN