Acting on the instructions of the Regional Director, PBGEN RONALD OLIVER LEE, a total of 1,235 Search and Rescue (SAR) trained personnel were placed on stand-by for possible deployment in response to typhoon #MaringPH.

Of the more than one thousand personnel, 518 personnel were actually deployed to conduct rescue operations, relief operations, road clearing operations and other disaster response, while the 735 Reactionary Standby Support Force (RSSF) were still in high alert for any possible deployment.

Before the anticipated landfall of the typhoon, PBGEN LEE instructed the different units of PROCOR to coordinate with their Local Disaster Risk Reduction Management Councils (LDRRMC) to synchronize their preparations with their respective Local Government Units.

As of the press time, 10 areas were reportedly flooded particularly in Baguio and Benguet. 40 municipalities have no electricity: 27 in Abra, 10 in Benguet and 3 in Mt Province.

Meanwhile, 26 areas were without Cellular Communication Signals: 8 in Abra, 10 in Benguet and 8 in Ifugao.

Weather forecast indicate that the Typhoon Mareng will continue to bring moderate to heavy rains in the region, thus the public is advised to take precautionary measures against its possible impacts. 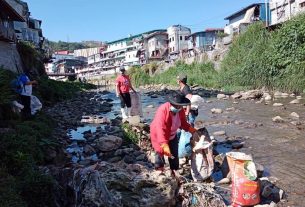