The elder Ocampo was dug up on Oct. 12 while the remains of the two minors were retrieved on Oct. 13. City Social Welfare Development Officer Betty Fangasan in a report to the mayor said Ocampo’s wife Mariejoe was injured but survived along with the family of Ocampo’s brother whose house was also destroyed.

The CDRRM Office headed by officer-in-charge Antonette Anaban which activated the operations center at the onset of the rains coordinated response to reported incidents with teams from other city government offices, line agencies, volunteer groups and private companies.

Bonifacio Dela Peña said the abnormal rainfall saturated the soil causing it to loosen and erode especially in unstable areas. He said the excessive amount of water also caused flooding mainly because drainage inlets were clogged with garbage mostly strewn face shields and masks and gravel from unkempt construction sites.

Once the openings had been cleared, the floods had subsided right away, he said. Inspections and assessments of the damaged infrastructures were still ongoing as of Friday to determine the estimate amount of damage wrought by the typhoon.

For her part, City Social Welfare and Development Officer Betty Fangasan reported that a total of 140 families composed of 564 individuals were affected by the typhoon.

Twenty-five families with 90 members took shelter at the three evacuation centers while 115 others with 474 members were served outside the centers.

There were 33 damaged houses, three of which were totally destroyed and 30 partially damaged. She said assistance were given to those affected by the calamity including the families of those who perished who received financial and logistical assistance from the city government, Dept. of Social Welfare Cordillera and Burgos La Union municipal office, Bureau of Fire Protection, Pyramid Baguio-Benguet crematory, Baguio Memorial Chapel, St. Vincent Parish and SM City Baguio.

Power outage was experienced in some parts of the city but restoration had reached 85 percent as of Oct. 13 through the round-the-clock and all-team effort of the BENECO under General Manager Melchor Licoben.

Major roads leading to the city were also hit by soil erosions and falling rocks and trees causing temporary passage disturbances at some point at the height of the howler but these were immediately acted on by the Dept. of Public Works and Highways and the Baguio City District Engineering Office. 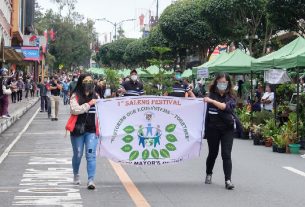