lawmaker Eric Go Yap was named as one of the top performing legislators after garnering high marks for approval and trust in a survey conducted by the RP-Mission and Development Foundation, Inc. (RPMD). Rep. Yap ranked seventh among 251 district representatives, both in terms of work performance rating based on the statistical research.

Yap vowed. Since he assumed as caretaker in 2019 and winning in the last election, Yap has been in the forefront of fighting vegetable smuggling which has greatly affected Benguet farmers while pushing for the arrest and conviction of smugglers. Yap has also sought to increase the bed capacity of Benguet General Hospital. The lawmaker is also one of the proponents of the sim card registration, which is now a law.

Yap is the only one among the 6 lawmakers in the Cordillera who made it in the list. While Baguio City Mayor Benjamin Magalong, also the only mayor in the Cordillera in the list, ranked 4th with a work performance rating of 86%. For the year 2022, ratings and rankings are thoroughly assessed based on work performance. As the local chief executive, mayors have a diverse range of responsibilities.

According to Dr. Paul Martinez of RPMD, these public officials who excelled in “constituent service” and service to the nation should be congratulated and commended for their exceptional
performance. Benguet governor Melchor Diclas also made it in the list ranking 15th. The independent and noncommissioned “Boses ng Bayan” national performance evaluation survey for the year 2022 was conducted from November 27 to December 2, 2022, in each city or district in
each region. Among the 65.75 million registered voters between 18 and 70, 10,000 respondents
were selected.

The sample employs a plus-or-minus 1% margin of error and a degree of confidence of 95 Respondents were chosen randomly, and the number of respondents was distributed proportionally based on the number of registered voters per area. “For the year 2022, ratings
and rankings are thoroughly assessed based on work performance.

As the local chief executive, mayors have a diverse range of responsibilities. Governors are accountable for the execution of programs and initiatives, the enforcement of laws, and the implementation of the province development plan. Representatives are elected officials entrusted with representing constituents and enacting legislation,” RPMD said in a social media post.

The national performance evaluation survey for the year 2022 was conducted from November 27 to December 2, 2022, in each city or district in each region, it added. The RPMD “Boses ng Bayan” nationwide survey, which has a margin of error of +/ – one percent, was noncommission and conducted independently using face-toface interviews of 5,000 adults as respondents. 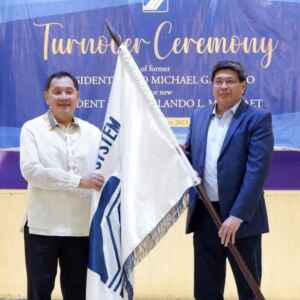