BAGUIO CITY The City Government and the Baguio Filipino – Chinese Community officially launched the Spring Festival 2023 in celebration of the Lunar Chinese New Year during the flag raising ceremony at the City Hall Grounds on Monday (January 16). “The Spring Festival aims to promote better understanding and cooperation between the Filipino and Chinese […]

BAGUIO CITY The City Council, during last Monday’s regular session, approved on first reading a proposed ordinance declaring every last week of October for the conduct of busking festival in the city. Under the ordinance authored by Councilor Leandro B. Yangot, Jr., the measure intends to enhance the reactivity of the residents and provide the […]

BAGUIO CITY With the resumption of major Panagbenga activities this year after a three-year hiatus due to the COVID-19 pandemic, the Baguio City Council passed an ordinance approving the temporary closure of various roads in the city on certain dates. The temporary closure of roads was requested by the Panagbenga 2023 Policy and Program Review […] 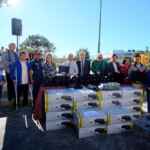 ENGR. ELISEO G. LAGMAN TAKES OATH AS NEW MEMBER OF THE BWD BOARD OF DIRECTORS

Engr. Eliseo “Eli” G. Lagman (third from right) takes his oath as a new member of the Baguio Water District Board of Directors. His oath was administered by Baguio City Mayor Benjamin B. Magalong at the BWD Main Office on January 12, 2023. Present and witnessing the occasion (from r-l) are Dir. Sonia A. Daoas-Women’s […]

The Baguio City Jail Male Dorm (BCJMD) has 15 computers devoted to online visitation program of the Bureau of Jail Management and Penology (BJMP) where persons deprived of liberty (PDL) can communicate with their families who are unable to visit them at the facility. JO1 Erik Mendoza said allowing the PDLs the time to regularly […] 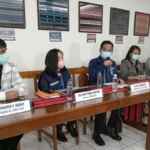 BAGUIO CITY Council has passed a resolution requesting restaurants and other food establishments in the city to post a notice indicating that they are charging a service fee. The resolution stated the notice should be written in bold letters printed on a sign board that is large enough to catch the attention of the diners. […]

BAGUIO CITY Council, through a resolution, has requested the telecommunications companies (TELECOMS) to put up assistance booths at People’s Park and other feasible places in the city to assist their subscribers in the registration of Subscriber Identity Module (SIM) cards. Councilor Betty Lourdes Tabanda, main author of the resolution, said providing assistance to the people […]