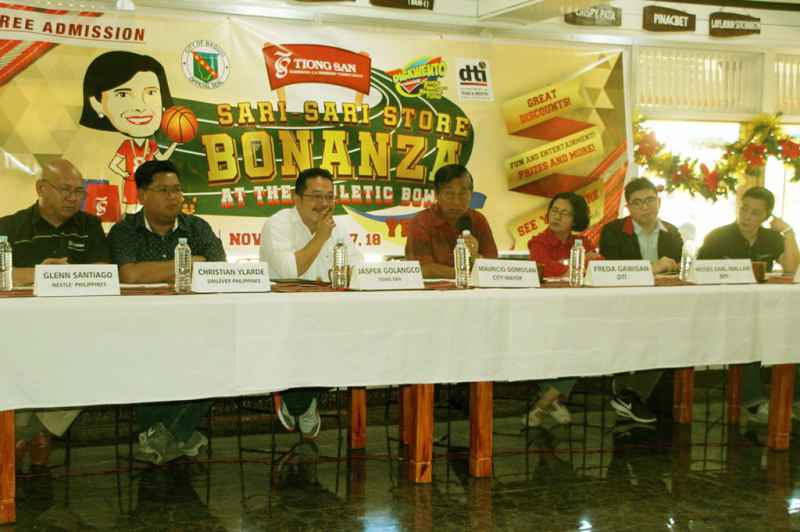 BAGUIO CITY – Residents of Baguio and Benguet, as well as nearby provinces, can again buy basic commodities, appliances, gadgets, and other goods at discounted prices at the “Diskwento Caravan” organized by the Department of Trade and Industry provincial office (DTI-Benguet) on November 16-18 at the Baguio Athletic Bowl.
Freda Gawisan, DTI-Benguet provincial officer, said the project is in partnership with the TiongSan chain of department stores, a 73-year-old business establishment that opened its first bazaar in Baguio’s central business district in 1945.
TiongSan is known in the city for its budget supermarkets and department stores.
It is a favorite buying place for “sari-sari” store owners because of the cheaper goods and the perks they get from their discounts or loyalty cards given by the establishment.
“It’s year 8 of the ‘diskwento.’ It’s been a very fruitful partnership,” noted Jasper Golangco, TiongSan group’s vice president for marketing.
Gawisan said the “Diskwento Caravan” is normally held before Christmas and before the opening of classes, to give the buyers an opportunity to purchase quality products at low prices.
Discounts range from one to 10 percent, depending on the items.
Around a hundred suppliers and manufacturers of various products will join the activity and offer their goods at discounted prices, the trade official said.
The Bank of the Philippine Islands (BPI) will also be giving its cardholders one month to pay purchases at the caravan without charges.
“BPI will be partnering with cardholders who will opt to buy with their debit and credit cards,” Gawisan said.
CALAMITY AREAS
The “Diskwento Caravan” has also been going around calamity-stricken areas.
Last October 24, the caravan was in Itogon, Benguet to serve the victims of Typhoon Ompong, which caused a fatal landslide in September.
The DTI-Benguet reported Wednesday that prices of basic commodities in the city and in Benguet province have remained within the government’s suggested retail prices (SRP), with supplies enough to last for a month.
“We are still under ‘normal.’ We have not seen an increase in the prices, which is more than 10 percent that we can consider profiteering. We still have enough stocks now,” Gawisan said.
She said Benguet declared a state of calamity in the province on Sept. 17, thus, the prices the day before that is the DTI’s basis for monitoring price changes.
Following the devastation of Typhoon “Ompong” (Mangkhut) in northern Luzon, President Rodrigo Duterte also declared a state of calamity in Regions 1, 2, 3, and the entire Cordillera on Sept. 27.
Gawisan said the declaration of a state of calamity means a freeze in prices for 60 days and that government agencies must monitor commodities under their jurisdiction.
DTI-Benguet monitors prices of basic commodities sold in over 30 big business establishments in Baguio and Benguet.
The DTI monitors the prices of items like milk, sardines, noodles, coffee, and candles.
The National Food Authority (NFA) monitors rice prices, while the Department of Agriculture (DA) monitors agriculture-based products.
“Each agency has its own basic necessities that they monitor,” Gawisan said.
She added the slew of oil price increases in the past months had not raised the prices of basic products in Baguio and Benguet so much.
She said upward price adjustments because of this have not been more than three percent. PNA / ABN

The two artists in the Session: SketchTour of Baguio on September 30 are Aurelio Castro III, sitting and sketching, in conversation with...

PART AT YOUR OWN RISK

-diggings of sewerage projects along Kisad Road cause traffic problems to motorists due lack of road signs Carlos C. Meneses/ABN

The Baguio City Council has revisited the issue on the ‘staggering’ increase in the payment of real property taxes in the city. In a...