The 17 tested positive after swab tested by the Ilocos Training and Regional Medical Center (ITRMC) were some of them were admitted, the DoH I reported. DOH – Infectious Disease Center Spokesperson Dr. Rhueuel C. Bobis told Amianan that they were expecting additional cases of COVID after conducting tests in several areas in the province.

“Inaasahan po natin na madaragdagan ito (COVID-19 patient) at para makagawa ng agarang aksiyon, at karamihan nito ay mga frontliners na na-expose (We are expecting additional number of COVID-19 cases so that we can do immediate action and most of them are frontline workers,” said Bobis.

The 17 new cases are from San Fernando City with five, Caba town has eight cases, one each from Aringay, Balaoan, Bauang, and San Juan.

The aforementioned barangays is now under heightened community quarantine. All households in these areas will be placed under strict monitoring and shall stay inside their homes to ensure containment of the virus, Ortega said.

A 36-year old male from sitio Centro, barangay Gana has a mild illness. The COVID-19 Inter-Agency Task Force from the city and the municipalities are now making stringent measures to contain the spread of the virus in the community. All barangays of the above mentioned are now under HCQ. 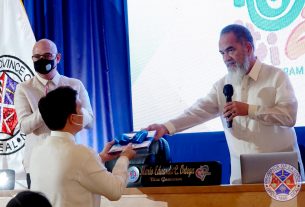