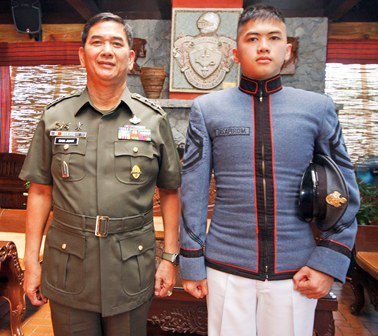 FORT DEL PILAR, BAGUIO CITY – Pongpeera Disapirom, 23, would be the sixth Thai to graduate at the Philippine Military Academy.
“The military exchange program was an opportunity for me,” said the unassuming lass from Thailand whom if not for the uniform would be mistaken as the usual Filipino young lad.
But his looks spells different from his dream mission.
As a second lieutenant in the Royal Thai Army after Sunday (March 18), Disapirom said, issues in his country challenged him to become a soldier.
Coming from computer technician mother and father whose careers are completely afar from the military service, Disapirom said though there is no insurgency in his country, civil disturbance shakes the country. He said he wants to become a solution to it.
Disapirom is the sixth Thai to graduate at the PMA.
The first foreign cadet to graduate from the Academy belonged to the Class of 1960 — Thaval N. Sawangpunka.
The Philippine Military Academy Class of 1978 is reputed to be the only Class with the most number of foreign nationals. When the Class of 1978 reported to the Academy there were four foreign cadets – one each from Thailand, Singapore, Taiwan, and the United States of America.
The following were the foreign cadets who belonged to the Class of 1978: Anthony Mark Carmicael, an American, resigned in April 16, 1974, just two weeks after reporting to the Academy for the start of summer training. (
Supakit Wanpess, a Thai, was later discharged for academic deficiency.  Hsueh Chao Yung was recalled by the Taiwanese government during his third class year at the Academy due to abrogation of diplomatic relations between the Republic of the Philippines and the Republic of China. (
Ho Sun Yee, a Singaporean graduated at the top of the 139-member Class on February 18, 1978 garnering the most-coveted Presidential Saber for being the class valedictorian. ACE ALEGRE / ABN