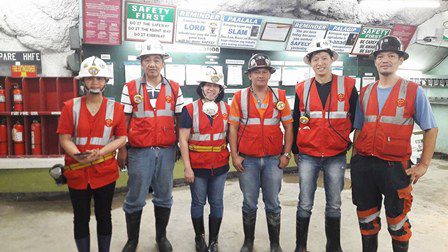 Marie Mesina (left), first vice-president for Corporate Banking Group at the Rizal Commercial Banking Corp. (RCBC), and the bank’s SVP for Corporate Banking Johan So (2nd, right) pose for a souvenir photo with some managers of Padcal mine, Philex Mining Corp.’s gold-and-copper operations in Benguet, at the Control Room of George Henry Shaft, 908 meters above sea level (masl), on Sept. 28. Eileen Rodriguez (3rd, left), group manager for Corporate Treasury at Philex Mining, said the RCBC has been so impressed with the operations facilities, environmental-protection projects, and rehabilitation efforts being pursued and implemented by the miners. Also pictured are Padcal’s Paul Lumpias, group manager of Mine Operations; Albert Tabangcura, safety, health and loss control manager of Safety/Loss Control Division; and Rosalin Roosevelt, shift manager at the Mine Division. They join other Padcal managers in briefing the RCBC officials on the functions and accomplishments of their respective departments at the Philex Guest House, in this town’s Brgy. Camp 3. Rodriguez, who traveled with Mesina and So for six hours up north to Padcal from Manila, said the duo is here to assess the credit-worthiness of Philex Mining and its Padcal operations, as the RCBC would like to grant the miner some credit facility. During their two-day stay in Padcal, the duo visited the mine camp, the mine tunnel, the Tailings Storage Facility No. 3 (TSF3) and its state-of-the-art open spillway, the nursery, and the mill operations, among others. PR