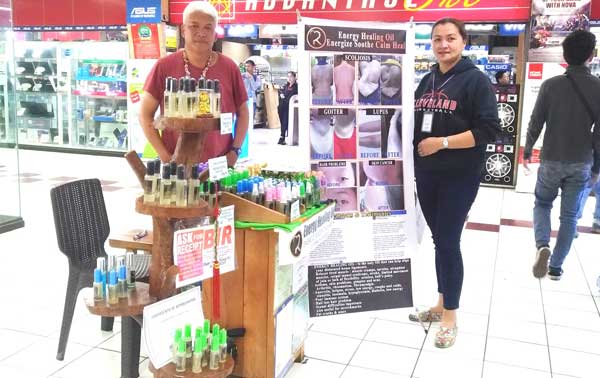 Though occupying a little space inside a mall in the City of Pines, a simple stall is slowly making its name, not only locally but also abroad, promoting a product that is proudly made in Baguio City.
“Amazing” and “It’s magic” are only few of the words that people use upon trying Rhoda’s Energy Healing Oil.
“You really won’t be able to explain its efficacy unless you experience it for yourself,” said Rhoda Ann De Guzman, one of the product innovators, said in Filipino.
She explained that this product fuses together the relaxing and rejuvenating properties of oils from natural essences and the innate capacity of the human body to mend itself.
With the growing number of testimonies from those who have tried and tested the product, Rhoda’s Energy Healing Oil now boasts of having both local and foreign users with distributors in Hawaii, Canada, Dubai and New Jersey.
De Guzman said that although small in proportion, their distributors and resellers in the country and abroad mostly started as users who bought the product as gifts for their friends and relatives, later on getting requests for more orders.
The product’s biggest promotion is through word of mouth and testimonies from the product’s users, De Guzman claimed, adding that social media has also been a good platform for the product.
Humble beginnings
Of course, at first it wasn’t easy said De Guzman in Filipino, recalling the times when she was introducing the product and she had to go bed to bed in a hospital to get some individuals to try the oil for free. Nobody would believe in the energy healing oil unless she got them to try it and unless it’s free, she added.
As it turns out, those who she provided with the first samples were also the first individuals to support and promote the product to their relations.
The production of the oil began three years ago as a result of her 20 years of experience as a massage therapist and her daughter’s knowledge as a registered pharmacist.
She said it was her daughter who prepares the oils. “At first it was perfumes,” De Guzman recollected, but then her daughter became busy and she took over.
Her inspiration had been making massage oil for the therapy of a client who had a scoliosis and had to wear a brace. Wanting to be of better help, she searched for more effective means until she discovered the efficacy of energy healing. From there, Rhoda’s Energy Healing Oil emerged and now serves as a form of extension of therapeutic hands that sooths, calms and heals.
Energy healing oil
De Guzman said that unlike liniments that are either hot or cold and had to be massaged into a painful area in order to be effective, energy healing oil needs only to be applied into the affected area and gently placing the palm of the hand for two to three minutes to allow the energy to flow and facilitate self-healing of the body.
She claimed it is the only oil that can help align dislocated bones and ligaments so it’s particularly good for people with scoliosis and osteoporosis.
Among the many benefits of the oil include loosening up of tired muscles and lack of flexibility of joints; helps in the treatment of skin problems like skin asthma and acne and relief of pain from arthritis, rheumatism and fibromyalgia. It can also help people who are suffering from anorexia, fatigue, stress, low energy, coughs and colds, insomnia, diabetes, sexual impotence and hair loss.
De Guzman shared that among the first successful users of the oil is her sister who was suffering from lupus and was turning bald. She said she could not promote the product until her sister was healed with the oil’s help. Now, the oil is greatly being used by the whole family and other relatives.
She explained that mainly, if there is pain in the body, there is blockage of energy so it cannot flow properly. The oil neutralizes the blockage for the energy to flow and in turn heals or removes the pain.
She said the product uses grapeseed and olive as the base oils and essential oils like frankincense and myrrh with other essences including sandalwood, jasmine, rosemarie, peppermint, lemon, tea tree, rose and orange. It’s all natural and safe no matter how often it is used, added De Guzman.
Their stall can be found at the 3rd floor of Baguio Centermall with mobile number 09394324090. They are also open for resellers and distributors.
Melanie Anga-angan/ABN