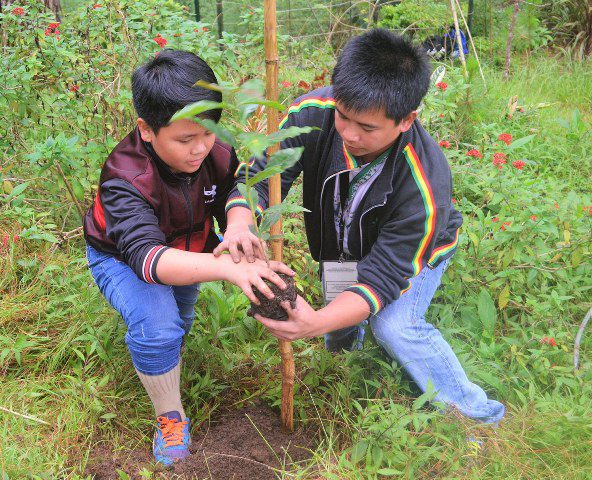 BAGUIO CITY – John Hay Management Corporation (JHMC) a subsidiary of the Bases Conversion and Development Authority (BCDA) continues to underscore the corporations’ commitment to implement forest and environment management programs to maintain the forest density, clean air and water resources.
The CJH forest serves as one of the major forest watershed cradle of Baguio City, home to a dense pine forest.  Being the 53% remaining forest cover of the city, it is a sound assumption that its resource base provides for clean water to its downslopes even extending beyond its immediate bounds.
For mid-year 2017, a total of 5,058 various indigenous tree species has been planted by the JHMC in cooperation with various government agencies, the academe and private enterprises in various locations surrounding the John Hay reservation.  This is in compliance with Executive Order No. 26 series of 2011 otherwise known as the National Greening Program which mandates GOCCs to extend full support and assistance to the said program.
The latest addition to this was the 90 seedlings which were planted by the members of the JHMC Board of Directors during its 16th regular and special board meeting which was held in Baguio City last August 29, 2017 and the 80 Benguet Pine and Arabica coffee seedlings planted by the learners of the Baguio Country Club Village Elementary School led by their school principal, Jeannette Lacana, and some members of the faculty.
Further, in partnership with San Vicente National High School, another 1,000 various indigenous tree seedlings were planted at a portion of the John Hay reservation in Upper Dagsian summing it up to 5,058 seedlings planted this year.
For every tree planting activity, Engr. Editha Mejia, JHMC environment officer, integrates the concept of environment protection through co-awareness talks incorporating suggestions practical to our daily ecologically sound thereby reducing and adapting the effects of climate change.
Through the leadership of Allan R. Garcia, JHMC president and CEO, the JHMC is constantly coordinating with the Department of Environment and Natural Resources (DENR) and other government agencies to enforce environment and forest protection laws within Camp John Hay.  Some of these are the apprehension of illegal occupancy, excavation and tree cutting activities in the Camp.
Being a responsible steward of the 53% forest cover in Baguio City, the JHMC assures its stakeholders that it will remain committed in fulfilling its mandate on forest and environment management and is continuously improving its environmental performance through efficient use of resources.
Currently, the JHMC is working to obtain ISO 14001:2015 certification which is an established international standard that sets the parameters for an environmental management system.  With the certification, being set as a strategic initiative by the corporation, continual improvement and consideration of the management of all environmental impacts relevant to its operations is ensured. PR / ABN