LA TRINIDA, Benguet- The National Irrigation Administration -Cordillera (NIA- CAR) has completed 127 irrigation projects out of 195 programmed for 2022 equivalent to 75 percent accomplishment, including solar-powered irrigation system, benefitting more than eight thousand farmers across the region. Based on the latest Summary Status of Project Implementation Report submitted to Benito Espique, Jr., Regional Manager of NIACAR by Supervising Engineer Sammy Kimbungan, completed projects this year has generated 833 hectares (has.) of new service areas and restored 753.15 ha. for a total of 1,586.15 ha.

For this year, NIA-CAR was granted a total allocation worth P1.960-Billion. Meanwhile, the agency
also completed a total of 120 irrigation projects out of the 122 programmed for CY 2021 or equivalent to 98 percent accomplishment, benefitting a total of 9,313 farmers while it generated a total of 5,917 jobs. 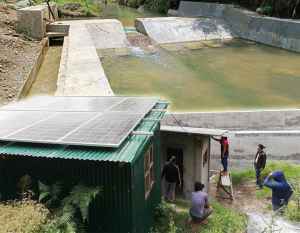