CAMP DANGWA, BENGUET – 41 individuals wanted by the law were arrested in a week-long intensified manhunt operations conducted by PROCOR cops from April 17 to 23, 2022. Based on the records from the Regional Investigation and Detective Management Division (RIDMD), for the week, Baguio CPO recorded the highest number of arrests with fifteen (15) […]

45 WANTED PERSONALITIES NABBED IN A WEEKLONG OPERATION OF PROCOR COPS

As a result of the relentless efforts of PROCOR cops to track down persons wanted by the law, 45 wanted personalities were arrested from February 20 to February 26, 2022. Based on the records of PROCOR Regional Investigation and Detective Management Division (RIDMD), for the week, Benguet PPO recorded the highest number of arrests with […] 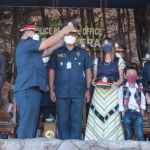 Chief of Personnel and records management division, Move to the next higher rank

The Chief of the Regional Personnel and Records Management Division (RPRMD), PCOL FRANCISCO B BULWAYANJR, formally took his oath as Police Colonel during the Monday Flag Raising and Oath-taking & Donning of Ranks Ceremony at Masigasig Grandstand, Camp Major Bado Dangwa, La Trinidad, Benguet on January 10, 2022. During the ceremony, PMAJ Geraldine Aydoc, the […]

PROCOR Camp Major Bado Dangwa, La Trinidad, Benguet: Aside from the three reported incidents in Abra, the traditional new year salubong in the Cordillera Region is generally peaceful. According to the reports reaching the Regional Director, PBGEN RONALD OLIVER LEE, one incident of illegal discharge of firearms, one incident of a stray bullet, and one […]

Ligtas Paskuhan 2021: “More than a thousand PROCOR Cops, to be deployed for the Holiday Season

As we celebrate the Yuletide Season, Police Regional Office Cordillera will be deploying PROCOR cops to ensure the safety and security of the public during the holiday celebrations and activities from December 16, 2021 to January 6, 2022. Based on the data from the Regional Operations Management Division (ROMD), a total of 1,147 PROCOR cops […] 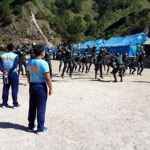 After completing their required days of quarantine, 129 police trainees; 91 males and 38 females, will now be undergoing the Public Safety Basic Recruit Course (PSBRC) as they officially opened the PSBRC Class 2021-02 during the Opening and Reception Rites in Dam 2, Philex Mines, Tuba, Benguet on November 9, 2021. The opening was facilitated […]