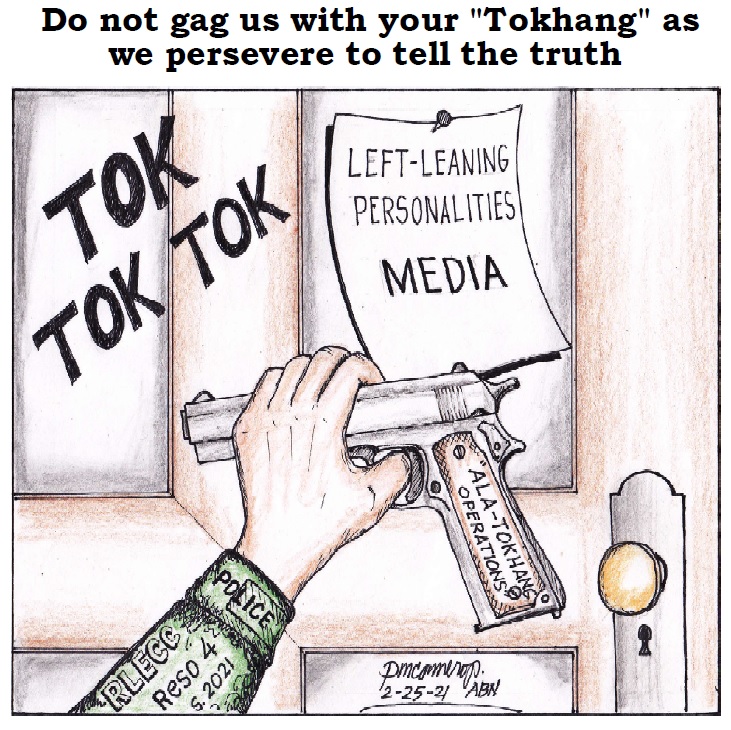 The latest resolution of the Regional Law Enforcement Coordinating Committee (RLECC) enjoining members of the law enforcement agencies together with representatives of lical government units to conduct tokhang to known “left-leaning” personalities in the government, media, and other entities is sending a chilling effect to the people who believe in the freedom of expression and who have still faith in democracy.

Even the timing of the letter, at the eve of the 35th Anniversary of the EDSA Revolution, is ironic. The word “Tokhang” will never be forgotten by the families, friends, relatives, and survivors of the war on drugs that was boasted as the solution to the drug menace and drug trade.

The Oplan Tokhang used in the government’s war on drugs by visiting or knocking on the doors of suspected drug personalities and plea for them to stop dealing and using drugs will be used against known “left-leaning personalities” to dissuade them from supporting or being active members of the CPP-NPA-NDF or any of its so-called known front organizations and return to the folds of the law.

Such is what the members of the RLECC see as the solution to the insurgency problem of the country that lasted for over five decades.

The use of tokhang sets up a dangerous precedent because it follows the same procedure of the war against drugs which is a failure in stopping the drug trade and instead caused the death of thousands. Years passed since tokhang was unleashed and yet news on drug addicts, drug addiction, drug market still occupy the headlines.

And they expect this tokhang will be the answer to why there are many poor people who are struggling against oppression and discrimination and other historical injustices? And from whose discretion will the definition of “left-leaning” or “leftists” be derived? Who are the people that will fall under their category or branding of “left-leaning” or “leftists”? Members of the media are not spared of this tokhang approach as indicated in the title of the RLECC resolution.

Whenever the media interviews people who are critical to someone else especially those who are in government positions or those who have power and they will publish it, they will be perceived as siding with the critics. Whenever the media writes, broadcasts or publishes information so that the citizens will be challenged to think or make a realization of their leaders’ successes or failures and from that, an open exchange of ideas and opinions flourish, they will be branded as bias. Whenever the media conveys the people’s concerns, demands, desires, and pleas to government bodies, they will be bombarded with legal actions and condemnation from the people who are supposed to be standing by the provisions of the Philippine Constitution on the rights of every Filipino.

If ever the resolution would be adopted and implemented by the law enforcers, Local government units, and different government and non-government institutions, will it mean that they will be going against the media who are covering the people who are branded according to their standards or definition as left-leaning, leftists and supporters of the CPP-NPA-NDF? The media writes or being out news from the mouth of the news sources whether “leftists”, “rightists” or centrists”. Writing about the statement of anyone should not be mistaken as support for the news sources. It is about bringing out the information and truth the people deserve to know.

The freedom of the media is a fundamental Constitutional right. The media have the right to move freely without control of those in power. This role is a crucial indicator of democracy, which earned us the role as the fourth pillar of democracy.

We welcome the withdrawal of the Commission on Human Rights Cordillera Regional Director Atty. Rommel Daguimol of his signature from the resolution and standing by the rights of the people of the freedom of expression. We appeal to the other signatories to do the same. May we appeal also to members of the Cordillera Regional Peace and Order Council (RPOC) to reject the resolution on Constitutional Grounds. 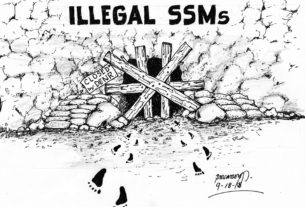